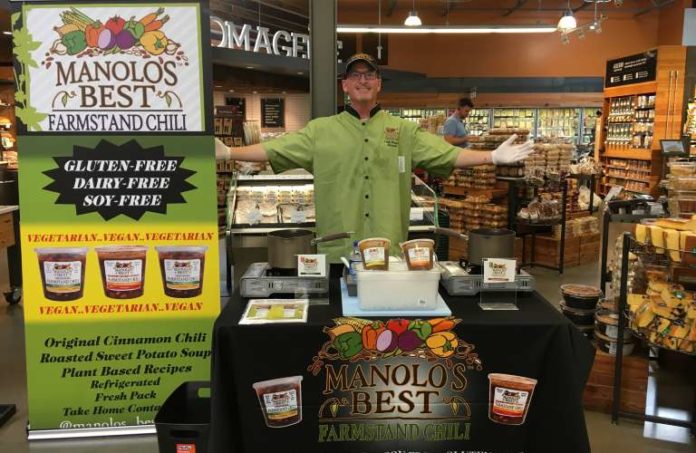 A Manolo's display in a Whole Foods ... before the pandemic forced an end to sampling. - Manolo's

Manolo’s Best Farmstand Chili and Soups started because Wolinsky — hurting with digestive issues — couldn’t find what he wanted the most: a good bowl of chili.

That was back in 2010, when Wolinsky created a healthy chili that is vegan, gluten-free, soy-free, nut-free, dairy-free, meat-free and — thanks to some of his wife’s Latina influence — filled with a variety of flavors and spices that he says make it a dish anyone would eat.

At least, that’s what folks told Wolinsky when he served it at a local charity event that became the start of a 10-year journey that has been slowed — but not yet stopped — by the COVID-19 pandemic.

“Manolo’s began in my kitchen in 2010 after a health event that forced me to seek wellness through conscious consumption, in every dimension of my life,” he said. “Selecting a vegetarian diet led me to a better lifestyle and made me passionate and intentional about sharing the benefits I experienced: Weight loss, no more allergies and better sleep were just a start.”

Wolinsky, a serial entrepreneur but just a cooking aficionado, found he still had one problem.

“I couldn’t find chili that was both healthy and tasty,” he said. “So, I determined I had to create my own blend, and that’s how the first batch of Manolo’s entered the world.

“After losing 50 pounds, and feeling validated by friends and family, my wife encouraged me to do the unthinkable: Turn my homemade meal into a business and share what I had created.”

Wolinsky’s entry into the food business is the same as so many other small business entrepreneurs. He would make a big batch of his chili for friends, and people thought it was so good — and so healthy — that they would tell him he should sell it in stores. That was back in 2016. And it’s a goal that is a lot easier said than done.

Fortunately for Wolinsky, who lives in Burlington County, the Whole Foods in Cherry Hill had a program for local food entrepreneurs at the time, called “The Hatchery.” The program provided a place in the store for local entrepreneurs to give away their product. Wolinsky said it wasn’t really an economic development program. He just made it into one.

“They invited local food entrepreneurs to come into an area next to the cash register once or twice a month, and you could share whatever you produce,” he said. “I think it was more of an endorsement of their support for local vendors and the community than any type of opportunity to get into their stores.”

Wolinsky gave away samples for all of 2016 — about $30,000 worth of product, he said. At the end of the year, he was invited to put Manolo’s in the soup bars at the store in Cherry Hill. Soon after, the product was in Whole Foods stores throughout southern New Jersey and Southeastern Pennsylvania. By the end of 2017, it was in the soup bars of eight stores. By the ends of 2018, it was in 15 stores.

In July 2019, Wolinsky got his big break: Whole Foods decided to put his product in the refrigerated section. The growth opportunity meant the company had to move is operations from a kitchen in Trenton to a manufacturer in Gettysburg, Pennsylvania. Soon after, Manolo’s was in the refrigerated section and soup bars of approximately 60 Whole Foods stores throughout the mid-Atlantic.

The company was producing approximately 2,000 containers of product a month.

Wolinsky and Donado were the creators of the brand. Wolinsky credits Donado, whose family is from Puerto Rico, for bringing a Latin flair to the product, which comes in two flavors: Original Cinnamon Chili and Roasted Sweet Potato Soup.

And, while the two have spent their life’s savings creating the product, they have brought others along during the process.

When they were creating the product in Trenton and delivering it to local stores, they hired local residents, many of whom were formerly incarcerated people or veterans who were struggling to find work. Almost all were from underserved communities, where unemployment rates are much higher than the national average.

When Manolo’s expanded into the Washington, D.C., area, the couple partnered with the Yellow Ribbon Fund when hiring those needed for in-store sampling.

The Yellow Ribbon Fund is a veteran service organization and 501(c)(3) nonprofit that helps families who are helping severely wounded, ill and injured post-9/11 service members from every branch of service.

“These are the people who are taking care of our veterans,” Wolinsky said. “We were able to offer them employment with the flexible hours they need.”

When in-store sampling ended at the beginning of the pandemic, the Wolinskys drove to the D.C. area to donate 240 fresh meals a month to Yellow Ribbon Fund families from April through July.

Wolinsky and Donado also partnered with CSLAP, which is a college scholarship leadership access program founded by Thomas Ray Garcia, a Princeton University graduate who is from the Rio Grande Valley in South Texas, and is a close friend of Manolo’s investor Matt Eventoff.

Wolinsky and Donado started an internship program using students based in the Rio Grande Valley in the program as a way to help them get experience — and a few bucks.

“We have always have enjoyed mentoring,” Wolinsky said. “This has been an opportunity to teach the new generation skills in digital marketing and sales. Our partnership has been immensely meaningful to us. We have established an official CSLAP internship position as a permanent part of the Manolo’s team and we hope to increase the number of these positions going forward.”

Manolo’s Best Farmstand Chili appeared to be well on its way to becoming a New Jersey small business success story when it got its big break in September 2020: Whole Foods said it wanted to put the product in all of its stores in the Midwest and in Toronto, Canada — 143 total stores, including those in the mid-Atlantic region.

This was preceded by two events that nearly brought the company to its breaking point.

First, the manufacturing plant in Gettysburg announced it was closing in the fall of 2019. A new plant — one that could safely produce and seal a refrigerated product — needed to be found. There are few that fit that need.

Whole Foods invited Wolinsky and Donado to use a facility it uses — in Itasca, Illinois, which is about 45 miles west of Chicago.

The plant fit the bill perfectly. It even helped the Wolinskys improve their product, they said. There was just one problem: The plant does not ship products to the East Coast.

Needing to survive, Wolinsky and Donado spent $60,000 on a refrigerated truck — and began making twice-monthly 830-mile trips to Itasca, where they pick up product and transport it to the Whole Foods warehouse in Landover, Maryland.

Then, of course, the COVID-19 pandemic hit — forcing all sample stations and soup bars to shut down. It was a crushing blow.

“If people could taste the chili, our sales would double,” Wolinsky said.

Wolinsky and Donado are optimistic about the future.

Despite all the challenges that came last year, the company moved more than 100,000 containers of product in 2020.

“I’ve been in the business of sales and marketing for over 40 years,” Wolinsky said. “My whole theory is, you take a product to the people, educate them, talk to them, share with them — and then, they’ll tell their neighbor. And that’s what was happening.

“If I went into a store, I would sell more units of my product than Coca-Cola would sell cases. I’d sell 50 containers a day. But, if I can’t have people taste it because sampling’s not around, then they’re just looking at an item on the shelf. It’s tough.”

The couple remains undaunted. They even talk about expansion.

For now, they just have to wait out the pandemic — continue to grow in the refrigerated “fresh pack” soup section and wait until they can do what they love to do — give more samples to more customers.

The product, Wolinsky said, sells itself.

“We’ve been able to develop deep relationships with vegans and with other people who have eating issues and digestive issues,” he said. “People love it because it is soy-free, nut-free, dairy-free, meat-free — it’s everything-free. And it’s fresh.”