When he found himself staring at the grocery store shelves wondering why there were so few meat-free chilis, Mitch Wolinsky decided to do something about it. He launched Manolo's Best Farmstand Chili with his wife Yvette. Their goal? To create a line of chili that would be more flavorful, made with high-quality organic ingredients and that wouldn’t irritate his stomach like most of the brands he regrettably taste-tested.

“When I set out on this quest seven years ago,” Wolinsky says, “I decided that not only would I learn chili and healthy eating, I was determined to surround myself with experts from all areas of food design and collaborate with them to arrive at something very special and unique.”

By experimenting with recipes in their South Jersey kitchen, the couple came up with a delicious low-calorie vegan and gluten-free chili that their family and friends couldn’t seem to get enough of.

“The answer,” Wolinsky says, “was to make a product fresh, not with chemicals to preserve it for 45 days.”

Today, Manolo’s can be found in both Pennsylvania and Garden State grocery stores, including Whole Foods, where being able to get an independent label on the shelf is no easy feat. The original recipes, a cinnamon-based, medium-spiced, four-bean chili, along with the roasted sweet potato, are still among the only vegan chilis in about 2 million Google hits that are actually for sale in a grocery store in the region.

Vegans are surprised: no soy in this chili

Since his college days, Wolinsky has enjoyed a not-so-secret love affair with chili. Back then (before he decided to go meat-free) he was always playing with different ingredients, heaping turkey, short ribs and sirloin into his pots and pans, hoping to come up with a hearty concoction that would happily feed the guys in his University of Maryland dorm. 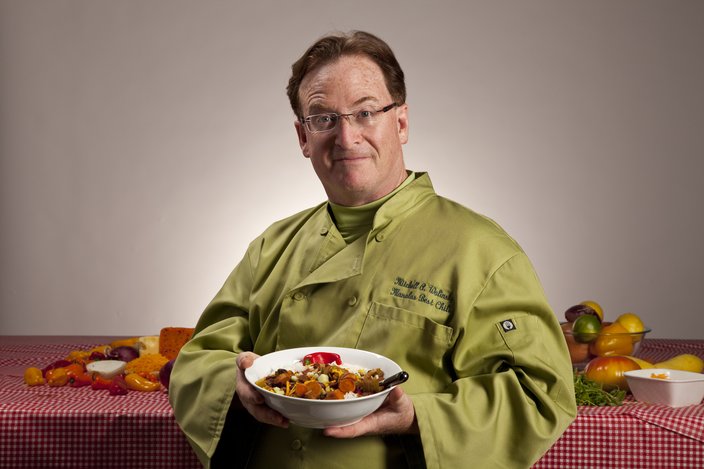 “I would go to chili cook-offs and read cookbooks that had chili recipes,” he says. “Then I started to prepare my own chili from mixes that were available and then from scratch recipes, becoming a chili hobbyist.”

The self-proclaimed chili master never thought back then that his passion for chili would become a career, let alone that it would open the door to a healthier lifestyle for him or his family. But even before he had a name for what would become the Manolo’s brand, he was doing something unique from many of the groceries – he was making small-batch, artisanal chili that never skimped on the quality of ingredients.

Wolinsky personally guarantees that there is never any exposure to the top eight allergens that can impact food and people’s relationship to it. “I feel safe in claiming that we are a clean food,” he says, “and healthy because of our extremely low sodium, gluten-free, soy-free, plant-based formula.”

Going meat-free seemed a logical next step for an amateur gourmand who was becoming more interested in overall health and wellness.

“In light of the significant trend of carnivores struggling to offset or compensate for their meat intake,” he says, “our chili offers the option to get a hearty chili without sacrificing flavor.”

And even though Wolinsky’s customers tell him that they sometimes put his chili over rice or in an omelet with (gasp!) sausage, he’s pleased that they are exploring a vegan option at least some of the time.

“We do not forgive this sacrilege,” he admits.

But Manolo’s toasted sweet potato chili is as thick as a stew – it can catch even the strictest vegans off guard. One won’t find the typical meat substitutes made from soy in this stuff. Instead, Wolinsky’s concoctions can stand alone as a balanced meal with plenty of vitamins and antioxidants or even as a side dish or cold dip.

Word has certainly caught on.

“We started out in Cherry Hill and are now in Marlton and Princeton, New Jersey,” Wolinsky says.

In Pennsylvania, Manolo’s can be found in North Wales, Glen Mills, Jenkintown and Center City, a top 10 store within the Whole Foods rankings nationally.

“Convenience has driven our sales,” he admits. “Manolo’s lasts seven days or can be frozen for two months. In our first day at [the] Center City Whole Foods Market, there were at least two dozen toddlers and children loving the sweet potato recipe and their moms were so happy finding food their kids loved that was as nutritious as grown-up food.”

Did someone say gluten-free?

Wolinsky has been interested in dietary trends for many years now, especially as he formulated new recipes that would satisfy customer demands. One important consideration he wanted to make with his chili, in addition to being meat- and dairy-free, is that Manolo’s is also gluten-free.

“We have a regular following that includes gluten-free meet-up groups and with parents with autistic children that do not get behavior spikes when they dine a la Manolo's,” he says.

Wolinsky met a mother and her two daughters, ages 6 and 8, at a store in North Wales recently. It turns out the 8-year-old is a celiac patient who has struggled with nutrition ever since being diagnosed. Now, he says, her mom buys a gallon of Manolo’s chili every week from the Whole Foods manager. She prefers to heat it herself rather than buy it hot from the soup bar. Wolinsky makes sure that chili is available for the mom and kids. He should know.

Even before the chili wells for 12 hours, Wolinsky personally packs, weighs and seals the bags that he delivers to each of the Whole Foods stores in the region. The commercial kitchen where he now works is a meatless, allergen-free venue licensed by the state of New Jersey health department. Wolinsky personally guarantees that there is never any exposure to the top eight allergens that can impact food and people’s relationship to it.

“I feel safe in claiming that we are a clean food,” he says, “and healthy because of our extremely low sodium, gluten-free, soy-free, plant-based formula.”

Manolo’s contains about a third of the sodium standard to most other soups or chilis on the market, making it a no-brainer for anyone who has been told by their doctor to ease up on the salt.

On a typical day in the commercial kitchen that Wolinsky and his wife rent several days a week in Hillsborough, New Jersey, the smell of beans and potatoes wafts through the air as the couple busily package the products.

Wolinsky says he’s driven by the fact that 60 percent of New Jersey residents want a heart-healthy “flexitarian” diet, one that’s heavier on plant-based meals than ever before. Practically speaking, Wolinsky takes a food-as-medicine approach to making his chili, especially as more people may find themselves facing the scourge of diabetes and high blood pressure. He sees food as being able to help reduce inflammation while not causing spikes in blood sugar.

“We are like a food medicine,” he says, “and history tells us that food has always been used as medicine.”

“Following my passion, not following the money,” he says, “has led me to a happy place that I gladly share with my wife, friends, family and employees. There is nothing better than meeting up with high school friends and turning them onto Manolo's.”

A sobering fact is that 80 percent of deaths from heart disease and stroke are caused by a combination of high blood pressure, tobacco use, elevated cholesterol and not enough consumption of fruits and vegetables. Americans are also experiencing record numbers of Type 2 diabetes diagnoses. One can scarcely turn on the television without seeing another ad for another medication promising to lower blood sugar. But what about dietary changes?

“As someone who’s been made ill from eating out of mainstream supermarkets, but rarely from smaller purveyors, I have great empathy,” Wolinsky says.

He grew up outside of Washington, D.C., before attending the University of Maryland. His family has always been involved in the food business, and he grew up eating a lot of foods that were high in salt, sugar and preservatives.

“My family worked in the food business at Giant Food,” he says. “My dad was a produce warehouse manager, and I loaded carpet trucks and cashiered through high school.” 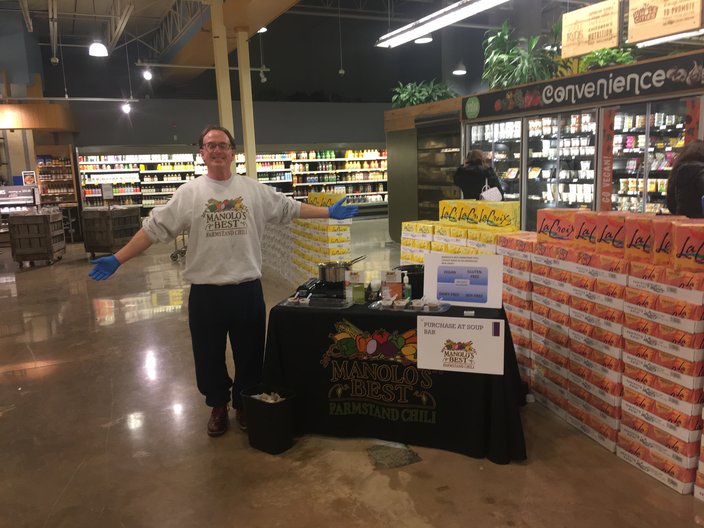 Wolinsky may not have foreseen then that he would be making his own health-conscious food after an awakening about his own wellness, or that he would be bucking trends to make it into one of the healthiest chilis on the market. But he couldn’t be more pleased to be able to deliver food alternatives to people who may not think eating healthy is synonymous with eating flavorful food.

“Following my passion, not following the money,” he says, “has led me to a happy place that I gladly share with my wife, friends, family and employees. There is nothing better than meeting up with high school friends and turning them onto Manolo's.”